Of statues in the 7th – bronze, marble and fur

The absolute best museum in Paris is also it’s best bargain – the Musée Rodin and sculpture garden.  There is a formal indoor museum, but since Auguste Rodin is most famous for his beautiful, imposing bronze sculptures (most famously for ‘The Thinker’, above) there is no point to staying indoors when the best stuff is outside, where the artist intended!

For only one euro you can walk the gorgeous grounds among the masterpieces.  Since picnic-ing in one of Paris’ many lovely parks is practically a national pastime, I highly suggest packing a lunch to enjoy during your visit (tuna sandwiches with capers, fennel and mustard viniagrette on Eric Kayser pain aux cereales was our choice.)  His most famous work is on display, including ‘The Thinker’ and ‘The Gates of Hell’, (and I believe a marble of ‘The Kiss’ inside the gallery) and while he was educated in classic sculptural technique, informed by Greek and Roman styles, his work was a radical departure and apparently controversial in his heyday.  The bodies of his subjects may be idealized, but the faces showcase intense emotion and feeling, a purely modern notion.

The other great bargain in Paris, also featuring “sculpture” of sorts, is not a museum per se, but a commercial establishment, none other than the famous Deyrolle taxidermy shop on Rue de Bac, just a block from my apartment. 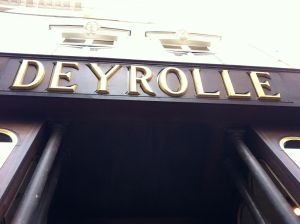 The first floor features their practical gardening equipment and outerwear, but the second floor is a curio cabinet of stuffed oddities big and small – all for sale!  You can look but you don’t have to buy, which is why this shop, to quote one Jeff Mirek is “cooler than the coolest museum – ever!”

If big game ain’t your thing, you can check out the preserved butterflies and beetles by the dozens…

And secure a priceless photo op at every turn…

But best of all, in case you were wondering what ever happened to that crazy nastyass YouTube badass…

And the honey badger STILL don’t give a shit!

One thought on “Of statues in the 7th – bronze, marble and fur”