You know I don’t speak Flemish! 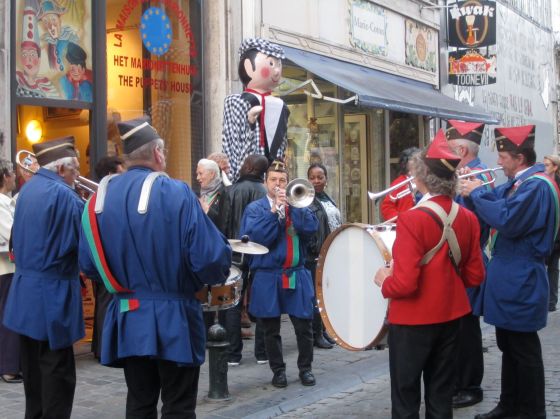 I have no idea why I was so hellbent on going to Brussels.  Since missing my chance on Wednesday, I knew I would regret not taking advantage of all this time in Paris to visit the capital of the European Union.  The refrain of “it’s only an hour twenty by train” was on repeat in my head, so comeback number two was in effect and off I went!

I had only six hours in port so could really only accommodate two agenda items,  museums and mussels (sorry, no DO!/DON’T! list today).  But the moment I rolled into town, I immediately asked myself, “WHY?”  Why was I here, why did I want to come, it all seemed a little… weird.  Well that’s what I wanted…something I’ve never seen before, perhaps found in a country who’s official language is a hybrid of country French and suburban Dutch known as Flemish, the mother tongue of the Flanders region, spoken by the people of Flemings (I could keep going…), last known to be relevant sometime near the end of the 17th century. (Author’s note:  there are two official languages in Begium – French and Dutch – Flemish is not an actual language, but I’d like to think it is!)

First impressions…I felt like I had stepped into a scene from a urban fairy tale, as the architecture is all gingerbread and Beaux Arts, which is what I sort of expected. 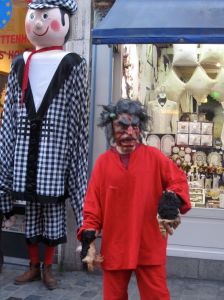 Yes, every guy in Brussels looks just like this

Get me some chocolate STAT so I can acclimate for god’s sake!  Soon I found my way to the Royal Museum of Fine Arts, home to several different collections, including the Magritte Museum, HQ for the renown Belgian surrealist’s most famous work that does not contain a pipe or a dude in a bowler.

After breezing through this group, I moved over to the Ancient Arts Museum, a extensive survey of the Flemish arts heyday (see above for last known point of relevance.)  You had your Bruegels, the Youngers and Elders, your van Eyks, your Rubens, your market scenes, your merchant portraits, your pale skin tones and neck ruffs.  I’ve always had an affinity for these paintings, possibly through early exposure playing the the board game “Masterpiece”, but maybe because they depict subject matter so unique to that time and place, yet with a timeless quality that feels almost contemporary.  Take this small study from Peter Paul Rubens: 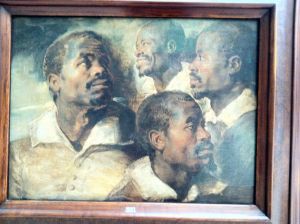 This is atypical of the large scale religious paintings and nudes he is known for, but it does look like it was created yesterday.  Didn’t you see something similar at your Brooklyn friend’s gallery opening?  I especially love their still lifes, usually of flower arrangements, or better still, if you read this blog and know me well enough, of food! 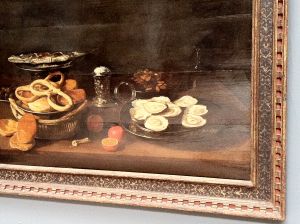 I could have lingered here for hours, but all this art works up one’s appetite.  Time for the second order of business – moules frites!  I wandered down to the city center, known as Grand Place and what a grand place it was…

Off the beaten path from this central point I found Chez Leon, allegedly the place for mussels and frites for generations.  It’s a little touristic, but given it was the only joint without a tout along this row of restaurants, I took it as a good sign.

One beer, a cocotte of mussles in the traditional celery, butter and garlic broth, a side of those crispy twice fried fries and mission accomplished!

As I continued to wander the quaint streets towards the metro and eventually the train station I realized I had grown quite fond of this this weird little town that could be the backdrop of a fractured fairy tale.  When you are serenaded home by a brass band (see above) in front of a marionette museum, complete with a dancing weirdo, Brussels turned out to be everything I expected, and more!