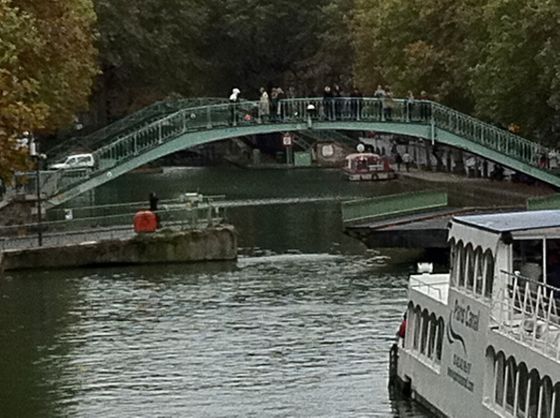 Inspired by Matt Gross’ amazing article ‘Lost in Paris’ from Saturday’s New York Times (thank you BOTH Lisa Namerow and Jeff Mirek for sending!) I decided to hit the bricks and venture into uncharted territory.  Though not documented in the story, I’ve always wanted to explore Canal Saint-Martin, deep in the 10th arrondissement, and fortified with 7 plus hours of sleep (finally!), off I went.  But first…lunch!

While researching this trip and potential subject matter for StreetMeat, I stumbled upon this post, at MyParisNotebook.com, extolling the virtues of a little Kurdish sandwich shop called Urfa Dürüm, also in the 10th (don’t ask me which Google search took me there!)

After negotiating more Metro stops than required, I stumbled upon the most hospitable looking storefront on the otherwise moribund Rue du Faubourg Saint-Denis.  Just like the sign says, they do one thing, and do it well, the titular urfa dürüm sandwich, rolled in their house made piping fresh flatbread and filled with your choice of grilled meat (chicken, beef, or in my case, lamb.) 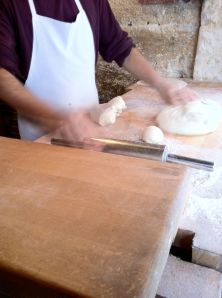 Similar to a Turkish doner kebab (which I will save for Berlin, THE place for doner after Istanbul) in packaging, the spectacular bread, warm and chewy, was definitely the highlight.  After enjoying my hard-earned lunch (did I mention the three Metro lines I needed to get there?) and knocking back a refreshing Kronenberg, it was time to settle up and head to Canal Saint Martin.   As I was paying, I noticed these pizza-like discs on the counter, topped with minced meet and spices, called lahmacum.  As I walked out of the shop, I remember eating one in Turkey (known as ‘pide’ there) and loving it, so I marched back in and bought one to go for canal-side snack.  What I really wanted was more of that bread and I was afraid I might not make it back for a repeat visit!  Though I felt guilty about double-carb-ing, it was worth the extra calories as this shamed the delicious urfa dürüm with its Next. Level. Shit-ness.  Simply spectacular spectacular.

So now time to walk this carbic bacchanal off with a stroll along Canal Saint-Martin.  Just a few blocks east of République (and not far from the sandwich shop), Canal Saint-Martin is a functioning canal that has evolved into a gentrified hipster enclave in recent years.  Boutiques, cafes and restaurants line the banks, as do watercraft of all shapes and sizes.  One can even barge up from the Seine and tour the length of the canal, passing through the elaborate locks along the way.

I’ve always been fascinated by urban waterways (perhaps this is why I love both Venices – Italy and California – so much) and the thought of using water as a primary thoroughfare.  Although the river Seine runs right through the middle of Paris, the high embankments separate that body of water from the community, whereas the canal is an integral part of this neighborhood.  Wandering around, you will always “catch” something interesting going on!

After Canal Saint-Martin, I was going to head down to the Marais and do a little shopping (shops are open there on Sunday, unlike most of Paris) but thought the better of it and decided to head home (by now I had figured out that you only needed one train change.)  I had executed a perfect adventure into a neighborhood previously unknown to me – why ruin it with a visit to a place already too familiar?

One thought on “Get lost!”