These may look like your standard plates of jambon and fromage found at every corner bistrot in the city, but these were far from ordinary.  For Jeannie’s last night in Paris, and an appropriate conclusion to my Fashion Week internship, we ventured up to the border of the 10th and 11th arrondissements, the Parisian equivalents of Brooklyn or Silver Lake, where the streets may still be a little shady, but the storefronts and restaurants are brimming with brilliant new ideas.

Our destination?  Le Dauphin, the new-ish wine bar from chef du jour Inaki Aizpitarte, who first rose to fame in the “bistronomique” revolution with his flagship Le Chateaubriand.  Fans of “No Reservations” may remember fondly as Anthony Bordain and Eric Ripert gushed like smitten schoolgirls over the Basque chef’s reinterpretation of French classics, launching a thousand foodie pilgrimages, and making a table damn near impossible to snag.  I actually had a reservation at this place two years ago, but had to cancel when my parents were “too full” from lunch to contemplate the journey across the river.  Thanks Mom and Dad!

We chose Le Dauphin because we wanted a little treat, to celebrate a blossoming friendship, and I had heard that reservations were not necessary.  Since attempting to speak French and use the apartment’s phone are both still a little intimidating, a joint that welcomes walk-ins is welcome to me!  I had also read that this spot was designed by in-demand Dutch architect Rem Koolhaus (see Prada Collection post) and given the head to toe Carrera marble veneer, it suddenly dawned on me that “Koolhaus” MUST be either a nom de draf, or the best given name for an architect ever!

Much to my surprise, we were asked if we had a reservation and the bartender rolled her eyes when we said no, but she was nice enough to accommodate us first at the bar and then at a table after about 30 minutes.  To tied us over while we waited to sit, we ordered the cheese and charcuterie, selecting what I thought to be a Basque cheese (given the x’s in the name and my inability to pronouce it) and jambon de navarre, which turned out to be the best damn ham and cheese either of us ever had!  I was right about the cheese, and sheep’s milk to boot (so very Basque indeed), which evoked a milder Pecorino, but more complex than a Manchego.  And the ham was just one rung down the quality ladder from the famed Iberico, which in my book is even better since I prefer to taste the pork and not the pig’s diet of hazelnuts and acorns.

What came next were several small plates of creative preparations, including a prawn tempura with the shell still intact, a delicate rouget with a melt in your mouth roasted eggplant and shellfish consomme, and a smoked mozarella that tasted of the wood fire oven and not some artificial smoke flavoring conjured up and a food lab.  While the presentations, techniques and flavors were bold and complex, I have never tasted food so fresh and vibrant in my life, as if this is the way God had intended it.  Probably the top dish of the night was an afterthought, suggested by our waiter for one more bite, a crab and roasted corn dish that was otherworldly.  Jeannie likened the presentation to a Rodarte dress, given the wispy fennel frond garnish and jewel toned  preserved blood oranges.  I just that it look like some good food, and hell yeah it was. 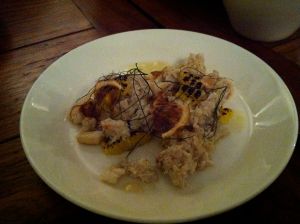 Finally we were treated to a fresh mint ice cream, off the menu, and again suggested by our waiter.  The barely sweetened cream offered just a hint of mint flavor, and it was drizzled with ripe olive oil and thyme.  Sweet and savory, just the way I like it!

I won’t comment on the tragically hip crowd that had me second guessing every bite given how svelte and chic they were.  But we did see bossman Aizpitarte pacing the dining room, bouncing back and forth between his two kitchens, conveniently next door neighbors, helping expedite when it’s really hopping.  I thought about snapping a pic to add to Kristin Rolla’s Brush with Greatness Gallery, but taking photos of the food was embarrassing enough (thank God I have perfected my stealth Faux Text n’ Snap technique.)  I may blog about food on occasion, but a food blogger groupie I am not!

Le Dauphin is located at 131 Ave Parmentier, on the Goncourt metro stop.

One thought on “Le Dauphin”