The Rolla Collection: Photography and Rolla.info

Following is part two of my interview with Phil Rolla, this time discussing his passion for photography and the creation of the museum dedicated to the art form, Rolla.info, just down the hill from him home in Bruzella, Switzerland.  Rolla.info, housed in a former kindergarten, is currently featuring the work Ruth Hallensleben.  She was a professional photographer who had worked for industrial concerns known to have built up the German war machine in the ’30s.  She shot factories, coal buckets and even wallpaper for corporate catalogs.  However, unlike Leni Riefenstahl, another prominent female German artist and filmmaker from the era, that is where her affiliation with National Socialism ended.  Phil was kind enough to take me on a personal tour of Rolla.info and discuss at length his love affair with photography and collecting philosophy.

KR: How did you start collecting photography?

PR: I had always taken photographs myself, and like photography, and then, when I started collecting, at the first moment I was surprised how much photography cost.  But then I realized it was accessible if you know what you’re after.  And it was a thing that I could become specialized in.  I could have my little niche of knowledge of what I collect you know, so I could be a specialist I could be on the level of other collectors in what I do, whereas in contemporary art collecting you’renot going to be out there collecting a Rauschenberg Combines or something like that, which are a few million dollars each so you’re always way off the peak of where it is.  Whereas in photography, if you know what you’re doing, if you know what you’re looking at, what you like and what you’re into, you could be at the peak of your little niche in the photography field.  And that’s nice.  If you want to have satisfaction in some you’re doing you have to have the satisfaction that you’re at least as good as everyone else who’s doing it, or you’re the best at what you’re doing.

KR:  Since you’ve opened the photography museum, have you decided to specialize in one particular area?

PR:  We decided to do the museum so we can show things from our collection.  And we suddenly realized, in our collection, there was a theme and a certain discipline.  So the decision was already made for us unknowingly.  The museum gave it (the collection) like a grid, gave it a dimension and gave it a template. 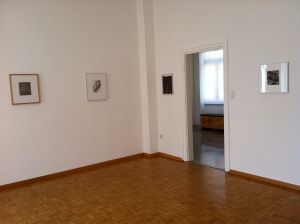 The main room at Rolla.info

KR:  You’ve often said “that’s not my thing” or “I’m not doing that right now”, so describe your genre of photography that you are most interested in collecting.

PR:  At one time it was called the “New Objectivity”, which is photography of objects – it can be a bulding, a fork, it can be any object, but it’s an object.  You look at it for what it is, you photograph it for what it is, then it could be a fork, or it could have been a Madonna, but the force of that photograph is just as strong whether it’s one or the other and when you look at it, you like it just the same.

KR: Is there artists or photographers, both older and contemporary, that are representative of that genre?

PR:  The old ones would be first there was Sanders, Renger Pach, Ruth Hallensleben, who we did the show of, then came the Bechers, then came the Dusseldorf School of Photography, which was started by the Bechers, and so there’s always been this grain of objective photography, like you see there (points to a photo).  This is Charles Jones, he did this in 1890.  All he did all his life was photography pieces of vegetables and fruits, but in a way, that if you look at it, especially if another photographer and says “That’s fantastic.  I don’t know how I could do that.”

One of the first to make editions was Irving Penn.  Each one was numbered, as in this is number 6 of 38, and he was really serious about this.

KR: Was this done posthumously?  Or did he edition them himself?

PR: Oh no, he editioned them himself while he was doing it.  What interesting, we have this one little nude by Edward Weston, that he signed, from 1928, and it’s numbered “2/50”.  So Edward Weston had this idea that he could sell photography and live by it, so he said he would make 50 of each and sell them.  He never made more that two!  Because people didn’t buy it.  He was selling them for $10, $50, whatever it was.   The most expensive Edward Weston ever sold, a few months ago, it was sold for one million and a hundred thousand dollars.  And the back of it is hand-written, by Edward Weston “Sold to Doctor Paul [I don’t know the name of the doctor] for $10.”

So authenticity is where the value is.  The print made from someone else could be just as good, but the value is in that signature or stamp.  And you have to be able to prove the authenticity because, at the end of the day, you could get screwed!