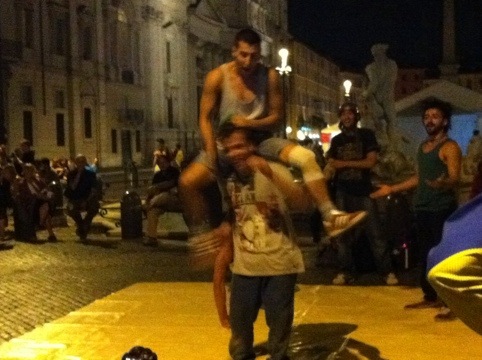 I always get sheepish about going to a tourist area while traveling, as if there’s some shame in hanging out with hordes of people in Tevas, cargo shorts and open maps. So it was my horror to asked to be dropped at Piazza Navona, scene of thousands above mentioned crimes daily but hell, it was the closest landmark I could pronounce that would get me to my dinner reservation.

Lucky for me there was a wild dancing crew busting Italia’s freshest moves as I got out of the car And it sounded like they dug up some Skint Big Beat sounds circa ’96 (think Fatboy Slim, but no sing-a-long.). These kids could spin with the best and my shame in going to a tourist spot was vindicated!

The quality of the photos are subpar but the energy is there – so is the linoleum!

As for this guy, shoot him again! His soul’s still dancing! 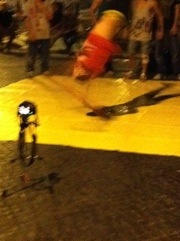